At the heart of Russian Buddhism

The Republic of Buryatia is located in the area of scenic Asian landscapes that include tundra, mountains, forests and steppes, and the oldest and the largest freshwater lake – the Baikal. The capital of Buryatia is Ulan-Ude.

If you want to immerse yourself into all the colours and flavors of Buryatia's beauty within a month, follow our series of publications twice a week. By the end of these series you'll be packing your travel bags and buying the tickets to experience all depicted activities and places in Buryatia.

We suggest you to start with the center of Russia's traditional Buddhist Sangha in the Ivolginsk datsan. It is here that the famous Khambo lama Dashi Dorzhi Etigelov “resides”: the unique phenomenon of the so called “imperishable body”.

At the age of 75, in 1927, XII Pandito Khambo Lama Etigelov plunged into deep meditation. Before that he had ordered disciples to exhume his body after some time and had promised to come back alive. According to his will, he was placed in a wooden box made from cedar - a bumkhan - and buried. In 2002, XXIV Pandito Khambo Lama Damba Ayusheev with datsan lamas in the presence of forensic experts and public activists revealed the bumkhan and, having performed the necessary rituals, transferred him to the Ivolginsky datsan.

Etigelov was found to have been miraculously preserved, as if he only died yesterday and has not undergone any changes over the years. Scientists are still puzzled, modern science cannot find any explanation for this phenomenon. Forensic medical examination experts reported that the skin of the body, the nails and the hair were safe, the tissues of the Lama were soft and flexible. It would be wrong to define him as a “body” since he sweats, changes the temperature and demonstrates other signs of living creature, not to mention his daily messages to Sangha. He’s been declared a sacred object of Buddhism. An individual temple for him was erected; the project was carried out on the pattern of old Buryat sketches. Etigelov may be seen only 8 times a year during major Buddhist holidays. There is also an opportunity to see him on some special occasions.

Khambo lama Etigelov is one of the three Buddhist shrines of Russia, along with the Atlas of Tibetan Medicine and the statue of Sandal Buddha Zandaan Zhou located at Egituysky datsan, Eravna district, 250 km. east from Ulan-Ude.

Ivolginsky datsan is the most significant place not only for three million Buddhists in Russia, but also for pilgrims and tourists from all over the world. It is sited at the foot of the hills surrounding Lake Baikal. The roofs of the temples and the colourful stupas look astoundingly beautiful amidst the wilderness. In winter the monastery is even more spectacular – coloured temples nestled in the snow against capped mountains. Dalai Lama noticed that Ivolginsky datsan is one of the greatest places of interest he had seen in the USSR. The datsan is protected by the government as a monument of religious architecture.

It is the largest Buddhist monastery and temple complex in Russia, which includes temples, dugans, a greenhouse with the sacred Bodhi tree, the Art Gallery of the Peoples of Asia “Erkhim Darkhan”. And most importantly - in 1991, the Buddhist University was established here. About 100 students are currently studying there at four departments: philosophical, tantric, iconographic, and medical. There is also a library building and a summer hotel on the territory of the monastery.

The temples are surrounded by prayer drums, Khurde. Before entering the datsan visitors should walk clockwise around it and spin prayer wheels at the same time while walking, which is the part of a spiritual practice of accumulating good qualities. Each turn of the drum equals multiple prayer repeat. This “rie goroo” is made around holy places, datsans, stupas, thereby showing one’s respect and willingness to accept the blessing. Inside the hurde, numerous mantras are twisted into a scroll around the central axis. Rotating it, you cleanse your karma as well as the space, making this world better and kinder.

It’s known that in 1932 when Joseph Stalin was in power in the USSR the campaign of complete eradication of religion by 1937 was declared. Thus, most temples were shut down and monks were sent to gulags in the 1930s. In 1945, a group of Buryat monks collected the signatures of 16 old lamas who were former exiles, went to Moscow to meet the country leader and asked for permission to erect a new Buddhist temple. Incredibly, they managed to get his agreement. Ivolginsk datsan was founded in 1945 by the authority of Stalin. Dalai Lama ХIV once said: “It was built, when Stalin was at the helm. I do not understand how it could happen, but this fact has helped me to realize that spirituality is deeply rooted in the human mind, and it is very difficult, if not impossible, to uproot it…”

Ivolginsky datsan really embodies the cultural diversity of Russia and of the Republic of Buryatia: a beautiful Buddhist enclave near Ulan-Ude. It’s definitely worth going to see the architecture and feel the vibe of the settlement. Wander around the monastery village and attend ceremonies, bringing yourself to a state that you'll try to keep for the rest of your life. 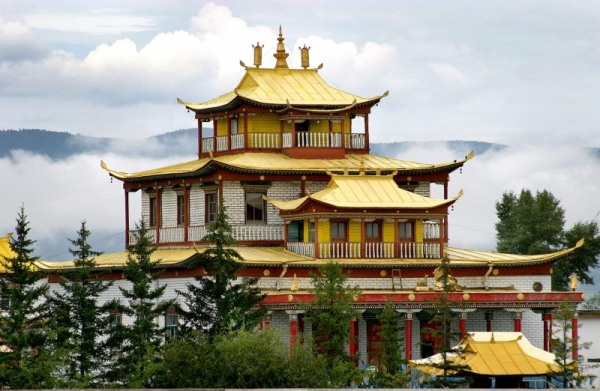